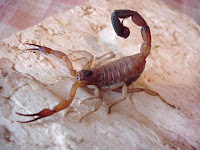 Sometime back on 3rd September, a reader left a comment on one of my post and asked if I had tried using scorpions to treat cancer. I did some further reading and would like to share some information about Escozul which is a natural organic effective remedy for cancer, made from the diluted venom of the Caribbean blue scorpion (Rhopalurus junceus). This Escozul producing species is only found in Cuba.

Unfortunately as far as I know, Escozul is not available in other countries and there are only two ways of getting this treatment. Make an appointment with a clinic in Havana, Cuba and then fly over there for a minimum stay of four days. I will share with you the other method at the end of this post.

How Does Escozul Fight Cancer Cells? 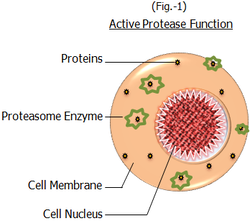 The Mechanism Used By Cells to Maintaining it's Needs
Illustrated in Fig.-1, both normal and cancer cells rely on a proteasome enzyme to maintain health. This enzyme breaks down proteins in the cell's membrane that helps maintain the cells growth and in doing so, controls any accumulation of unprocessed proteins which, if left unchecked, become toxic and leads to the death of the cell.
~ This process is called 'Proteases' ~ 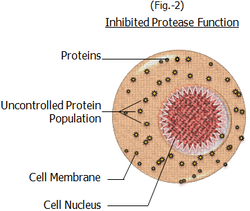 Escozul Inhibits Proteases
Illustrated in Fig.-2, the proteasome enzyme's function has been prohibited from breaking down the cell's proteins and disallowed toxic accumulation of unprocessed proteins in the membrane. This condition promotes the death of the cancer cell. Research shows that cancer cells are significantly more sensitive to Proteasome inhibitors than normal cells.
~ Inhibiting Proteases Kills Cancer Cells ~

What Types of Cancer Does Escozul Treat? 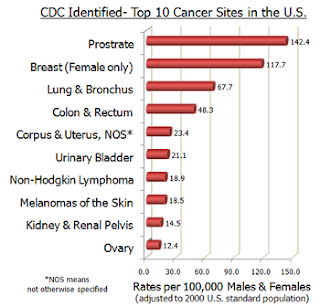 Escozul is shown to effectively treat the ten most prevalent cancers suffered by Americans (please see chart on left).

How effective  is Escozul?
Information of Cuban Clinical trials indicate, depending on the form of cancer and types of tumors, laboratory positives were noted in 97% of those treated with the toxin. Meaning that 97% of patients studied, experienced improvements and an enhanced quality of life. As well as 7-Year Survival Rates that are 400% greater than 5-Year U.S. rates. With a large percentage presenting total cancer remission. 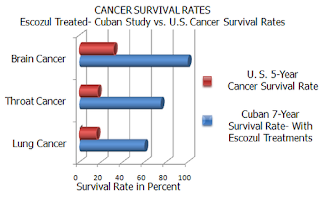 As compared to the data posted by the CDC, the statistical validly of the Cuban research in not verifiable due to little information posted as to sample size, etc. Some indications posted is that higher rates of prolonged life and total remission is achieved when the toxin is used exclusively. But, it is also known that the reduced effectiveness maybe directly correlated to at which point the toxin is used during the progress of the disease.

Getting Treatment
The other method of getting Escozul is to make use of a third party who will collect the medication on your behalf in Cuba and then courier to you. It charges a fee for it services. The only difference is that the patient does not need to travel to Cuba. Escozul is only available by prescription and one patient is only eligible for one prescription every 90 days. The cost is US$995 (RM3,200) for delivery within the US. You can get more information here.

I don't seem to be able to find any research papers and neither can you find much clinical studies because most of the research is done in Cuba itself. However, there are numerous testimonials that you find in various forums about the treatment. For an independent review, you can read Dr Ralph W. Moss's article Escozul: A Remedy with a Sting in its Tail here.

Like any medical treatment (conventional or otherwise), there are no guarantees. Depending on the patient's constitution, age, location and aggressiveness of the cancer, what works for one may not work for you.
Posted by CT Chang at 11:41 AM 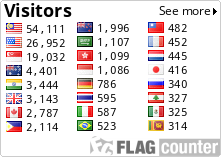 Someone You Know Got Cancer?

CT Chang
Subang Jaya, Selangor, Malaysia
An accountant by training but now in forced retirement due to stage 4 kidney cancer. Given less than 6 months to live in September 2009 and no cure by my doctors, I was determined to change my destiny. I like traveling to off beaten tracks because you experience and see life as part the journey, not at its destination. I like to watch the night sky for stars and its constellations and stare into deep space. We are not alone! I adopt a way of life which most people call Buddhism. I have not developed any level of spiritual attainment. I am a nobody, just someone wandering in samsara (cyclic existence).

Important: The information on this blog is not intended to provide medical advice, or be "prescriptive" in any way. It is merely a journalistic account of what I have learned about alternative therapies and its usage from the existing literature and from my own personal experience.

The information is from sources deemed to be accurate and reliable, but no guarantees of accuracy or reliability are hereby expressed or implied. Therefore, readers are urged to perform their own due diligence. When dealing with medical conditions, always consult with your licensed and trusted medical professional.